Who is who in the Taliban Political Office? 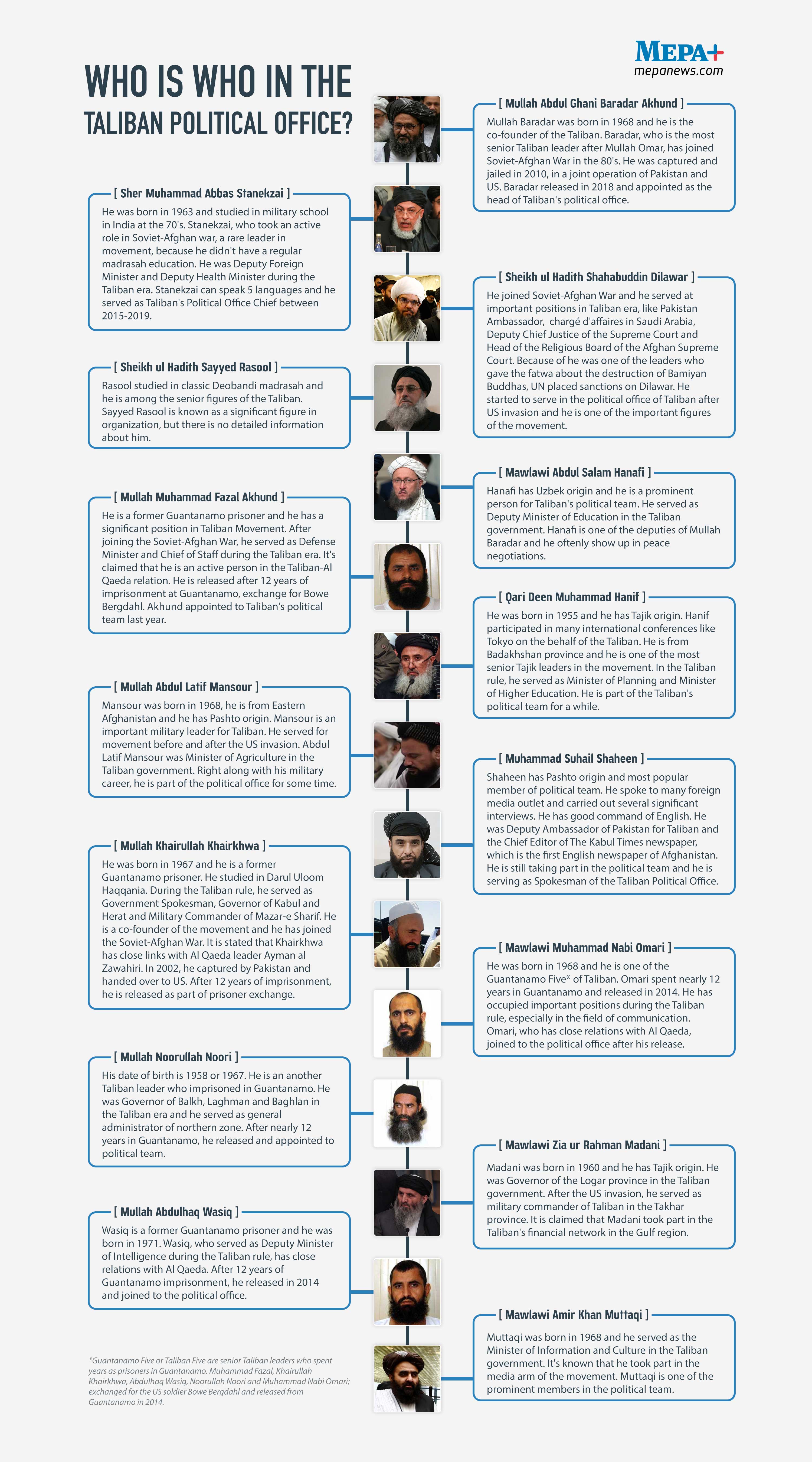 Mullah Baradar was born in 1968 and he is the co-founder of the Taliban. Baradar, who is the most senior Taliban leader after Mullah Omar, has joined Soviet-Afghan War in the 80's. He was captured and jailed in 2010, in a joint operation of Pakistan and US. Baradar released in 2018 and appointed as the head of Taliban's political office.

He was born in 1963 and studied in military school in India at the 70's. Stanekzai, who took an active role in Soviet-Afghan war, a rare leader in movement, because he didn't have a regular madrasah education. He was Deputy Foreign Minister and Deputy Health Minister during the Taliban era. Stanekzai can speak 5 languages and he served as Taliban's Political Office Chief between 2015-2019.

He joined Soviet-Afghan War and he served at important positions in Taliban era, like Pakistan Ambassador,  chargé d'affaires in Saudi Arabia, Deputy Chief Justice of the Supreme Court and Head of the Religious Board of the Afghan Supreme Court. Because of he was one of the leaders who gave the fatwa about the destruction of Bamiyan Buddhas, UN placed sanctions on Dilawar. He started to serve in the political office of Taliban after US invasion and he is one of the important figures of the movement.

Rasool studied in classic Deobandi madrasah and he is among the senior figures of the Taliban. Sayyed Rasool is known as an significant figure in organization, but there is no detailed information about him.

Hanafi has Uzbek origin and he is a prominent person for Taliban's political team. He served as Deputy Minister of Education in the Taliban government. Hanafi is one of the deputies of Mullah Baradar and he oftenly show up in peace negotiations.

He is a former Guantanamo prisoner and he has a significant position in Taliban Movement. After joining the Soviet-Afghan War, he served as Defense Minister and Chief of Staff during the Taliban era. It's claimed that he is an active person in the Taliban-Al Qaeda relation. He is released after 12 years of imprisonment at Guantanamo, exchange for Bowe Bergdahl. Akhund appointed to Taliban's political team last year.

He was born in 1955 and he has Tajik origin. Hanif participated in many international conferences like Tokyo on the behalf of the Taliban. He is from Badakhshan province and he is one of the most senior Tajik leaders in the movement. In the Taliban rule, he served as Minister of Planning and Minister of Higher Education. He is part of the Taliban's political team for a while.

Mansour was born in 1968, he is from Eastern Afghanistan and he has Pashto origin. Mansour is an important military leader for Taliban. He served for movement before and after the US invasion. Abdul Latif Mansour was Minister of Agriculture in the Taliban government. Right along with his military career, he is part of the political office for some time.

Shaheen has Pashto origin and most popular member of political team. He spoke to many foreign media outlet and carried out several significant interviews. He has good command of English. He was Deputy Ambassador of Pakistan for Taliban and the Chief Editor of The Kabul Times newspaper, which is the first English newspaper of Afghanistan. He is still taking part in the political team and he is serving as Spokesman of the Taliban Political Office.

He was born in 1967 and he is a former Guantanamo prisoner. He studied in Darul Uloom Haqqania. During the Taliban rule, he served as Government Spokesman, Governor of Kabul and Herat and Military Commander of Mazar-e Sharif. He is a co-founder of the movement and he has joined the Soviet-Afghan War. It is stated that Khairkhwa has close links with Al Qaeda leader Ayman al Zawahiri. In 2002, he captured by Pakistan and handed over to US. After 12 years of imprisonment, he is released as part of prisoner exchange.

He was born in 1968 and he is one of the Guantanamo Five* of Taliban. Omari spent nearly 12 years in Guantanamo and released in 2014. He has occupied important positions during the Taliban rule, especially in the field of communication. Omari, who has close relations with Al Qaeda, joined to the political office after his release.

His date of birth is 1958 or 1967. He is an another Taliban leader who imprisoned in Guantanamo. He was Governor of Balkh, Laghman and Baghlan in the Taliban era and he served as general administrator of northern zone. After nearly 12 years in Guantanamo, he released and appointed to political team.

Madani was born in 1960 and he has Tajik origin. He was Governor of the Logar province in the Taliban government. After the US invasion, he served as military commander of Taliban in the Takhar province. It is claimed that Madani took part in the Taliban's financial network in the Gulf region.

Wasiq is a former Guantanamo prisoner and he was born in 1971. Wasiq, who served as Deputy Minister of Intelligence during the Taliban rule, has close relations with Al Qaeda. After 12 years of Guantanamo imprisonment, he released in 2014 and joined to the political office.

Muttaqi was born in 1968 and he served as the Minister of Information and Culture in the Taliban government. It's known that he took part in the media arm of the movement. Muttaqi is one of the prominent members in the political team.

*Guantanamo Five or Taliban Five are senior Taliban leaders who spent years as prisoners in Guantanamo. Muhammad Fazal, Khairullah Khairkhwa, Abdulhaq Wasiq, Noorullah Noori and Muhammad Nabi Omari; exchanged for the US soldier Bowe Bergdahl and released from Guantanamo in 2014.