Malhama Tactical is fighting against Russia, Iran and sectarian Shia militant groups in Syria and they are drawing attention with their war techniques and abilities.

Ali Shishani (from Chechnya) chosen as the leader of the Malhama Tactical, after the former leader Salman Belarusi killed in combat in August 2019.

Ali Shishani and his group are continuing their military training and operation activities in the Idlib, Northwestern Syria.

Shishani’s words are published as they were in original.

Q: What kind of process did you experience after the killing of Salman Belarusi?

A: After the Shahada and the funeral of our dear brother Abu Salman, we gathered together and elected a new Emir. After that, we were returning our work to its normal function for some time and were busy with organizational issues. Afterwards, we continued to work in the same way. As under Abu Salman, MT continues its instructing and other military activities in the direction set by Abu Salman.

Q: What is your military experience based upon?

A: Our military experience is versatile and based on wide range of fundamental elements. For example, Abu Salman brought to MT his experience of service in the Russian Airborne Forces(VDV) and their training methods. Directly here in Syria, since 2013, we have received extensive military experience, participating in many various military operations: offensive, defensive, sabotage, special, and reconnaissance ops. In different areas and in different conditions, and at different stages of the war. We also studied the experience of other wars, including the Chechen ones.

Moreover, we have many years of experience in instructor activity. In addition to our own combat experience and knowledge, MT studied and borrowed the experience and methods of leading special forces from different countries. In general, we have sufficient military experience and capabilities to be useful in the military field anywhere in the world.

Q: Have you ever been to Chechen War? Do you have any active links with Caucasus region?

A: I was a child during both Chechen wars. As for the partisan forest underground, it was deeply undercover and I did not have the opportunity to join it. Therefore, of course, I did not have a chance to participate in the Chechen war. But I went through bombing and “cleansing” operations by the Russian invaders during two wars, and I remember all this.

As for ties – yes, we have ties with the Mujahideen in Chechnya, both with the veterans of the two Chechen wars, and with our generation of Mujahideen.

Q: When the War in Syria have started, many warriors came to Syria. How this process affected the insurgency in Chechnya? Is that factor weakened the struggle in the Chechnya?

A: The insurgency and struggle in Chechnya, even before the start of the war in Syria, had been in deep crisis for many years: both military and political. And it was depleted over time, and it was more and more difficult to get there, even for veterans and emirs who had previously left it temporarily due to one reason or another. And when the war in Syria began, many fighters, including veterans and some emirs, came to Syria to continue the fight against Russia’s allies, because it was almost impossible to continue the fight in Chechnya. So the weakening of the struggle in Chechnya is not connected with the arrival of fighters in Syria.

Q: Why did you prefer to come to Syria when there were an ongoing struggle in Chechnya?

A: After the second war, the rebel movement was locked in the harsh forests of Chechnya, and in order to survive, it was forced to maintain strict secrecy, and every year the youth had fewer opportunities to join it. It had no territories or known bases. And personally, I had no connection with the underground, so I just couldn’t join it.

And in Syria, there was a defensive jihad against the illegal criminal regime of Assad. Assad’s army attacked the Muslims and staged a real genocide, and these people called for help, and it was easy to come here to participate at that time.

So I went to where I was needed, where I could help Muslims. 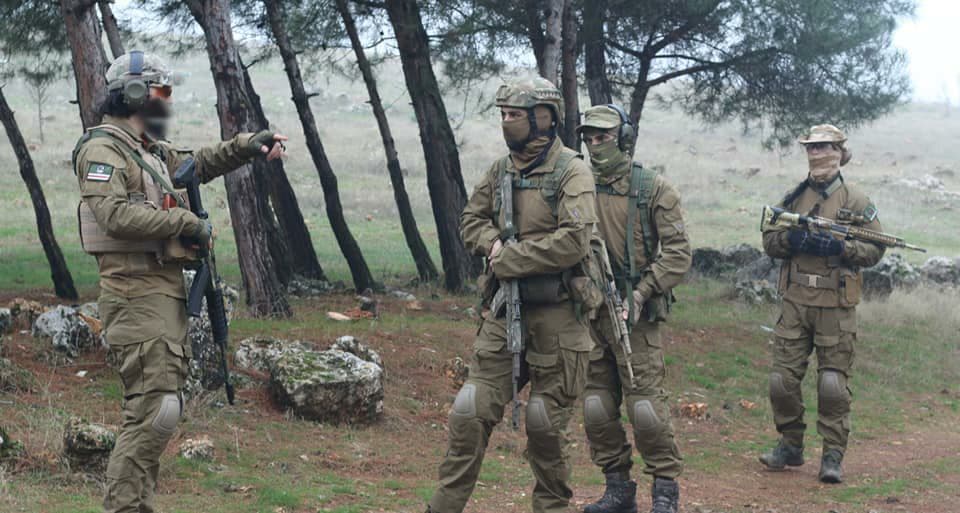 Ali Shishani and some of the Malhama Tactical members

Q: What do you want to say about the struggle in the Chechnya?

A: The struggle in Chechnya needs a completely new page to be opened. We have endured a lot of troubles and sufferings, have come a long way, but due to certain mistakes of the leaders, we were defeated. We saw and realized these mistakes. It is necessary to open a new page in the struggle for the liberation of the Chechen people when the time is right for this. We do not wish our people another war, we only wish our people freedom, justice, development and a decent life according to Sharia.

Q: Can you describe detailedly, what are you doing in Syria?

A: Since 2013, I have been participating in the war against the Assad regime and its allies. Since 2014, the Hariji organization IS was added to the list of our enemies, and we repulsed their atttacks in the north of Aleppo province near Azzaz in the summer of 2014. After the creation of MT, we concentrated on the military training of local fighters.

Over the years of our work, we have trained more than five thousand fighters, including the famous “Red Bands”. In addition to instructor activities, we (MT) organized and conducted special operations, for example, an attack on the air reconnaissance base of the Assad regime in the city of Aleppo.

We worked as military advisers, for example, during the YPG terrorist offensive in northern Aleppo in 2016, Abu Salman inspected the establishment of defensive structures on the front against the YPG. And during the blockade of the city of Aleppo by the regime and its allies in 2016, MT, as instructors and military advisers, prepared one of the stages of the operation to unblock the city, and the unit trained by MT successfully completed its task.

During a joint offensive by the Assad regime and ISIS in the northeast of Hama province in 2017, MT planned and implemented an operation to liberate some of the territories captured by IS.

During every major exacerbation MT takes an all-out participation at the front in those areas where it sees the greatest benefit from itself. For example, in 2019, during a major offensive by the Assad regime and Russia, we participated in assault operations to liberate some settlements in the north of Hama province. We also participated as artillery reconnaissance, identified enemy targets and pointed the artillery of the Mujahideen at them. We also acted as an air defense crew, and shot down an Assad regime plane in August 2019.

In general, by the grace of Allah, we have been helping the Syrian revolution with the means available to us for many years. We are trying to work for the benefit of the Syrian people to keep them safe.

Q: As Malhama Tactical, are you linked with any group? Are you co-operating with HTS?

Q: What do you think about Turkey’s increasing military presence in Syria?

A: We appreciate the presence of Turkey. This is a necessity, both from the military and from the political side. We all saw that local forces were not enough to stop the offensive of the regime and Russia, and that Turkey’s help was needed for defense.

Q: Russia have significant role in Syria for years. Is Russia still effective in the country like first days of 2015?

A: On the one hand, yes. Moreover, the Russian military is learning from its mistakes, and its actions in recent offensives have been much more effective from a military point of view than at the beginning. On the other hand, entry of Turkish troops and drones in Idlib has stopped Russia, and Russia can no longer operate as freely as at the beginning.

Q: What is your thoughts about latest situation in Idlib?

In terms of security, the situation in Idlib is much better than in the northern territories (Afrin – Azzaz – al-Bab) because Amniyat Idlib (GSS) is doing its job, praise be to Allah.

Improvement in the military sphere requires the unification of local factions into a single whole, into a single army, and military reforms are necessary.

We are also concerned about the plight of refugees who live in horrible conditions.